Hinglish- A Report on Usage and Popularity in India 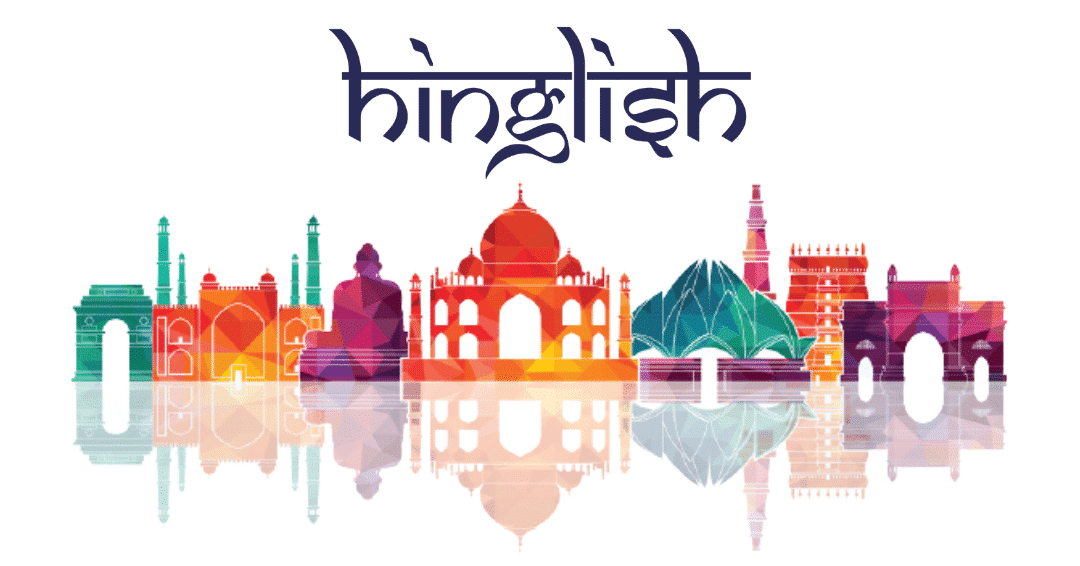 So, what is Hinglish?

There are perhaps very few of us who haven’t come across Hindi text messages like “Bro chill kar” and “Arey! Yeh kya bakwaas he?!”, all typed out in English.

English came to India with the East India Company and began its reign over the linguistic landscape of the country. It’s fascinating to see how Indians have moulded English to suit our cultural settings.

From the distinctly identifiable Indian English accent to the new Indian vocabulary in English, Indians have shaped and framed the language to make it their own.

Today India has the second-largest English-speaking population in the world at more than 250 million, right behind the United States. English is often a marker of social and cultural capital in the country.

While English has exerted considerable influence on Indians, what’s more, interesting is to explore how Indians have counter-influenced English and made it their own. 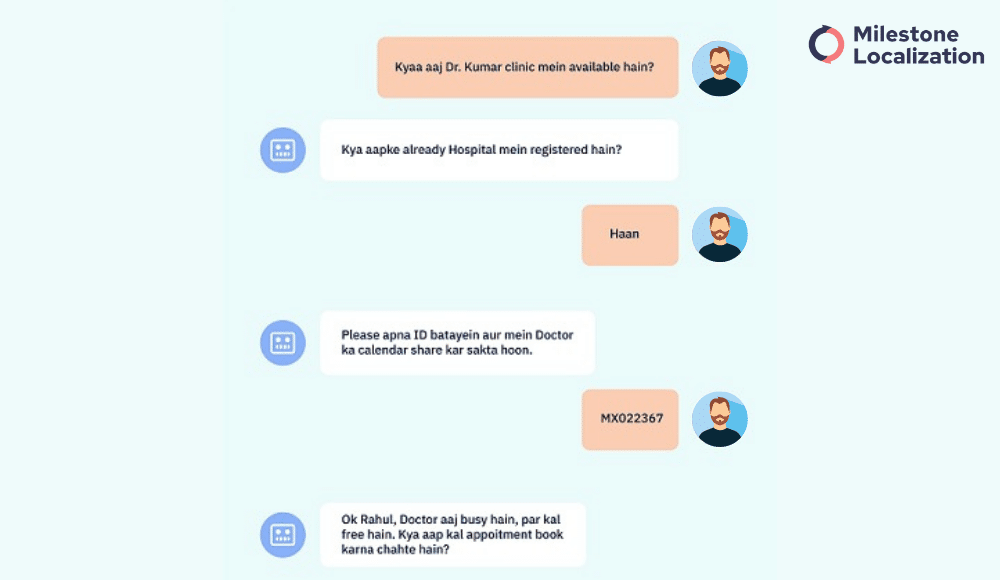 In the new internet era, Indian languages have found new ways of coexisting with English. The birth of hybrid languages is one of the most significant developments in language.

Native speakers of Indian languages today generously mix English words in their speech and write their languages in the Latin script.

The Oxford dictionary defines Hinglish as ‘a blend of Hindi and English, in particular, a variety of English used by speakers of Hindi, characterised by frequent use of Hindi vocabulary or constructions’.

It involves extensive code-switching, wherein speakers frequently switch between the two languages. The switching is however so ingrained that Hindi speakers often do not realise that they are using “foreign” words in their speech.

Often these foreign words become a part of day-to-day speech so much so that it becomes difficult to find a Hindi substitute for these words. From words like husband, wife, and cousin to train, road, and metro, English words have replaced Hindi equivalents in popular usage.

Even the most essential words like ‘Sorry’ and ‘Thank You’ are in fact foreign words that have become an indispensable part of our vocabulary.

Hinglish also involves the replacement of the traditional Devanagari script for Hindi with the Latin script. In fact, this hybridized language has become the norm thanks to the surge of internet and online communications.

Today, many of the brands in India communicate in Hinglish, whether we notice it or not. Almost all popular slogans are examples of Hinglish- from Pepsi’s ‘Yeh Dil Maange More’ to Hero Motorcorp’s ‘Hum Mein he Hero’, Hinglish has become the future of marketing. 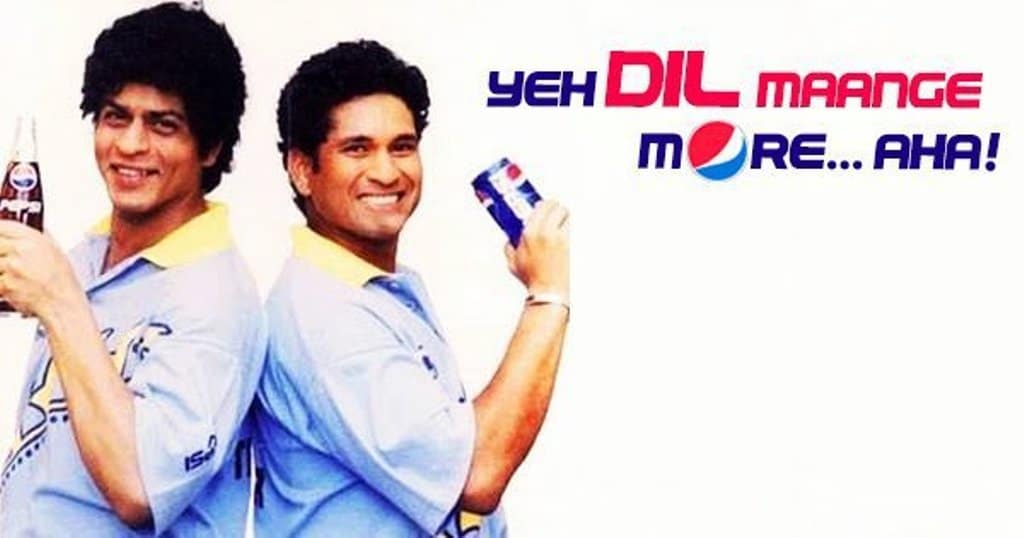 Given the increasing importance of Hinglish in India, we conducted a survey to understand whether Indians prefer Hinglish to Hindi and how various demographic factors affect their language preferences.

The objective of the survey was to develop an understanding that can aid brands in crafting a marketing and localization strategy that resonates with the Indian audience. 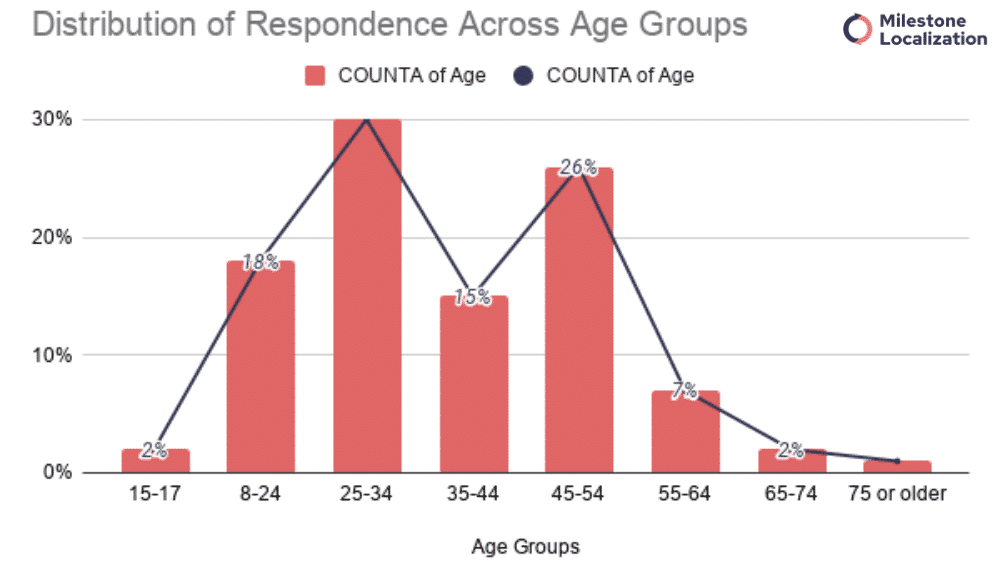 66.2% grew up in ‘big’ metro cities like Delhi and Mumbai while 11.2% came from Tier 1 cities like Jaipur and Ahmedabad. Together, these have been categorized as Metro and Tier-1 cities where an overwhelming majority of the respondents come from. 14.9% of the participants grew up in small towns and 7% in Tier 3 cities like Ajmer and Ludhiana. These have together been classified as Tier 2 and 3 cities. 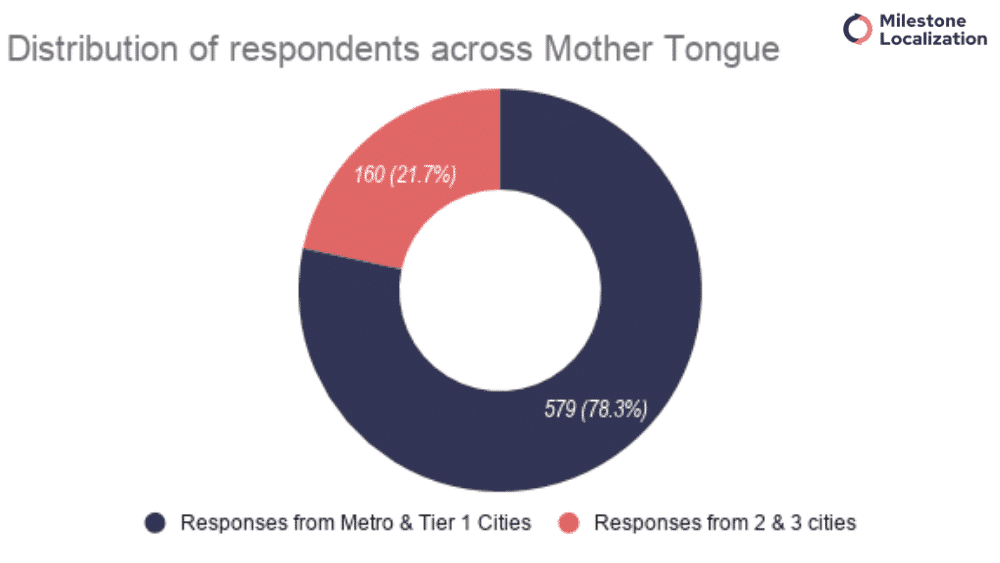 43.8% of respondents mix Hindi and English words in speech only sometimes. 39.5% always mix the two languages, while 16.7% said that they never mix the two.

When given this Hindi phrase in Devanagari script and Latin script:

When shown these two paragraphs:

When shown this message:

Impact of Place of Origin on Language Preferences

1. Place of Origin and Mixing Hindi and English

Among those in Metro and Tier 1 cities, 44% mix Hindi and English in their speech sometimes, 38% mix both the languages always and 18% never do it.

43% of those in Tier 2 and 3 cities mix Hindi and English sometimes, 44 % responded that they always mix the languages in speech while 13% said that they never do it. 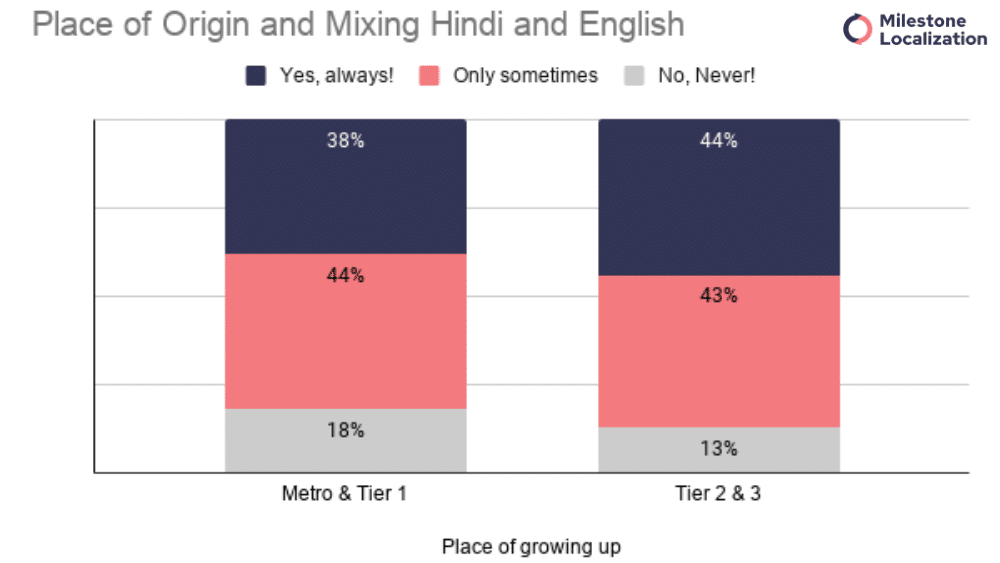 2. Place of Origin and Faster Speed of Reading

Among those in Metro and Tier 1 cities, 35% were able to read the Latin script faster while 11% could read the Devanagari script faster. 53% on the other hand could read both scripts equally fast.

In Tier 2 &3 cities, 18% found the Latin script faster to read while 19% could read the Devanagari script faster. 63% were able to read both scripts equally fast. 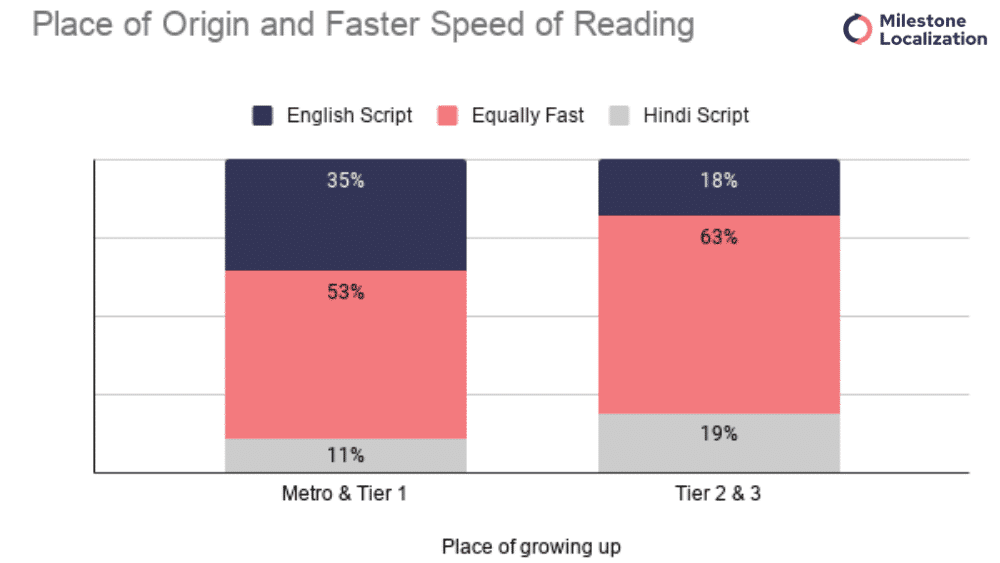 3. Place of Origin and Preferred Script

60% of those in Metro and Tier 1 cities prefer Latin script while 24% prefer Devanagari script. 17% stated that they prefer both languages equally. 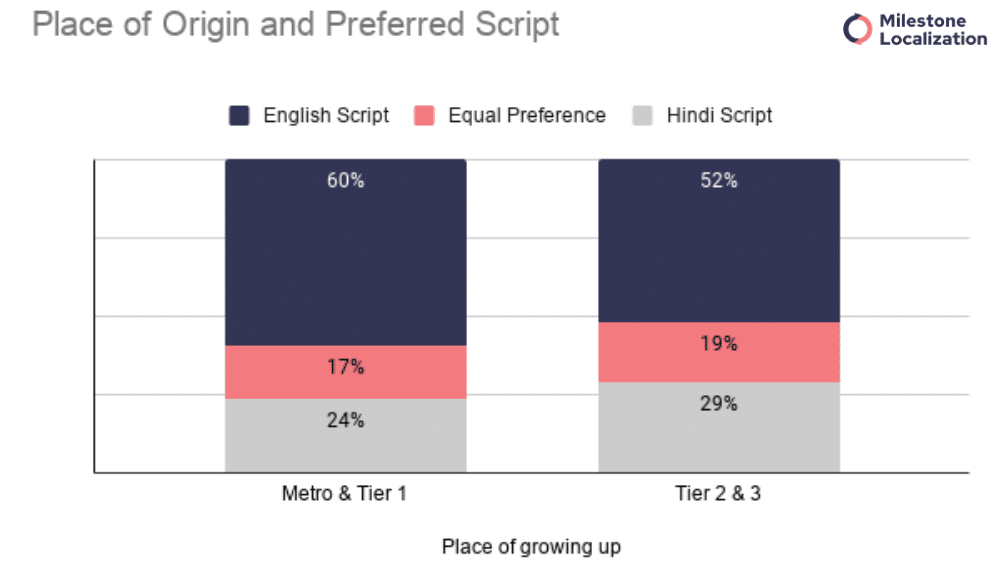 4. Place of Origin and Exposure to Hinglish

60% of people in Tier 2 & 3 cities are exposed sometimes to Hinglish, 19% come across Hinglish all the time while 21% are never exposed to it.

Impact of Age on Language Preferences

1. Age and Mixing English and Hindi

Nearly 40% of people belonging to all three Age Brackets responded that they always mix up Hindi and English.

Among Gen Y respondents, 44 % mix languages sometimes and 16% never do it.

37% of Gen Z respondents said that they mix up Hindi and English sometimes while 25% responded that they never mix both. 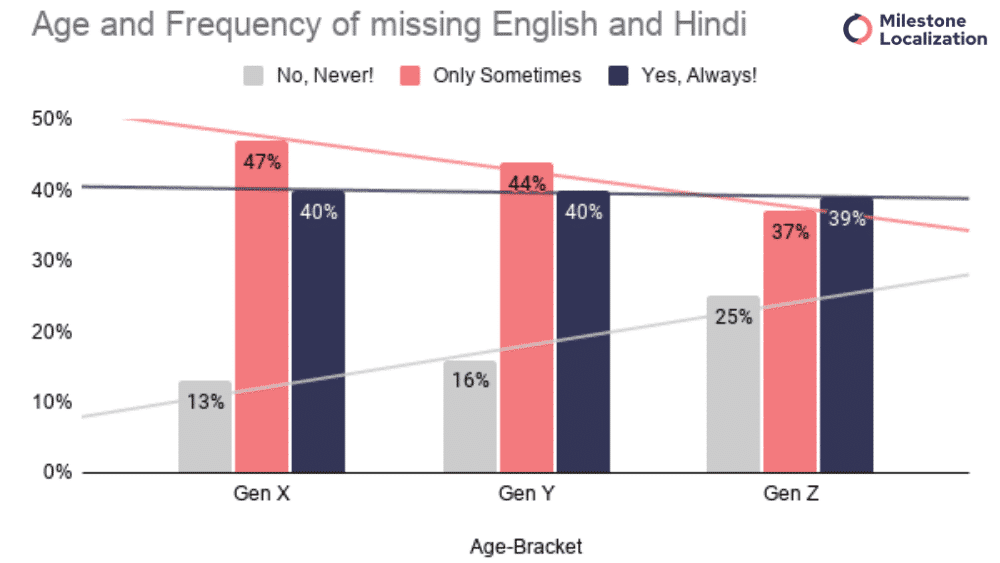 Among Gen Z respondents, 49% were able to read the Latin script faster while only 6% could read Devanagari faster.46% stated that they could read both languages equally fast.

Among Gen Y respondents, 35% found it faster to read Latin while 11% found Devanagari faster. 53% were able to read both languages equally fast.

Also Read: Hindi Idioms and Phrases That Can’t be Translated 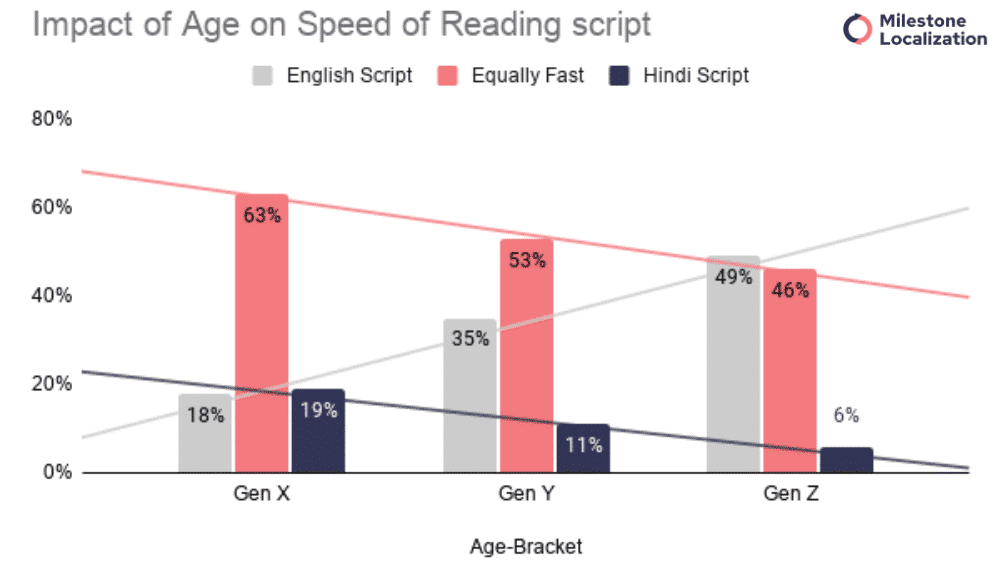 3. Age and Preference of Script

A whopping 75% of Gen Z respondents preferred Latin script while only 8% preferred Devanagari script. 17% stated that they have equal preference for both scripts.

Among Gen X respondents, 43% preferred Latin script, 37% preferred Devanagari script and 20% had an equal preference for both languages. 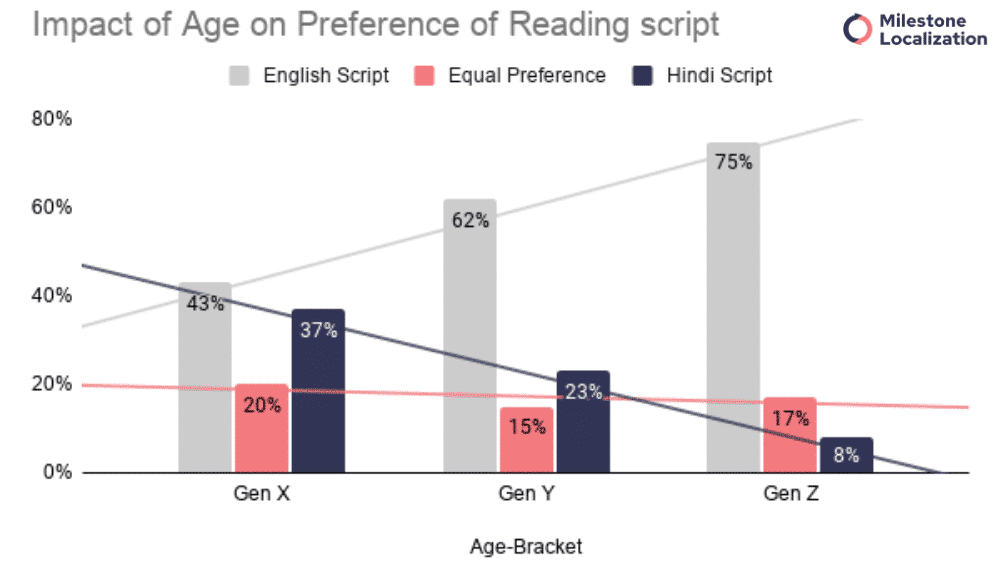 4. Age and Exposure to Hinglish

While 53% of Gen Y come across Hinglish sometimes, 17% see it all the time and 25% are never exposed to it.

60% of people in Gen X are exposed sometimes to Hinglish, 19% come across Hinglish all the time while 21% are never exposed to it. 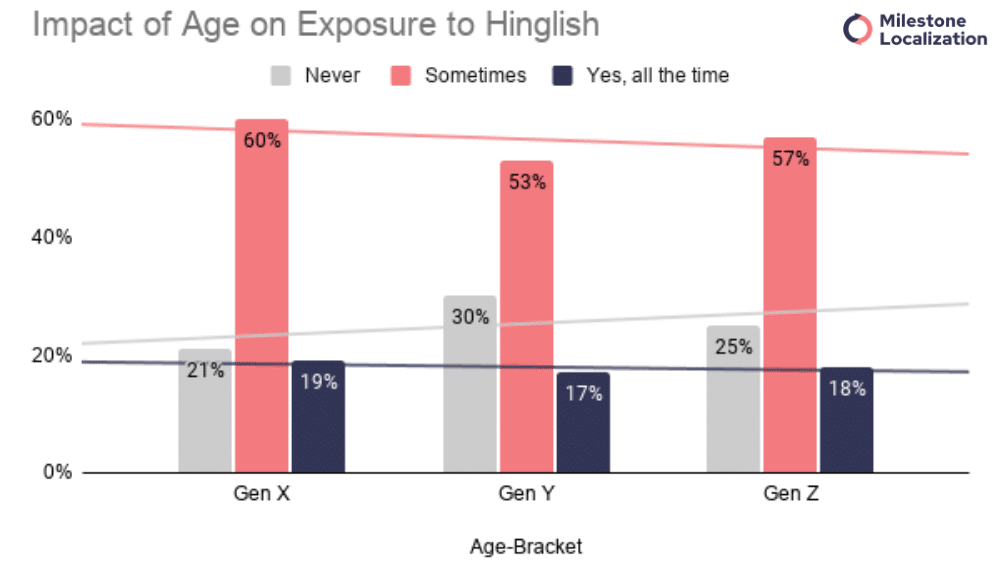 52% of people who identify Hindi as their mother tongue always mix up English and Hindi in speech. 42% responded that they do so only sometimes while 6% said that they never do it.

2. Mother Tongue and Speed of Reading

Among Hindi respondents, 25% were able to read the Latin script faster while only 17% could read Devanagari faster. 58% stated that they could read both scripts equally fast.

37% of respondents with other languages as their mother tongue read Latin faster while 10% read Devanagari faster. An overwhelming majority of 53% could read both scripts equally fast. 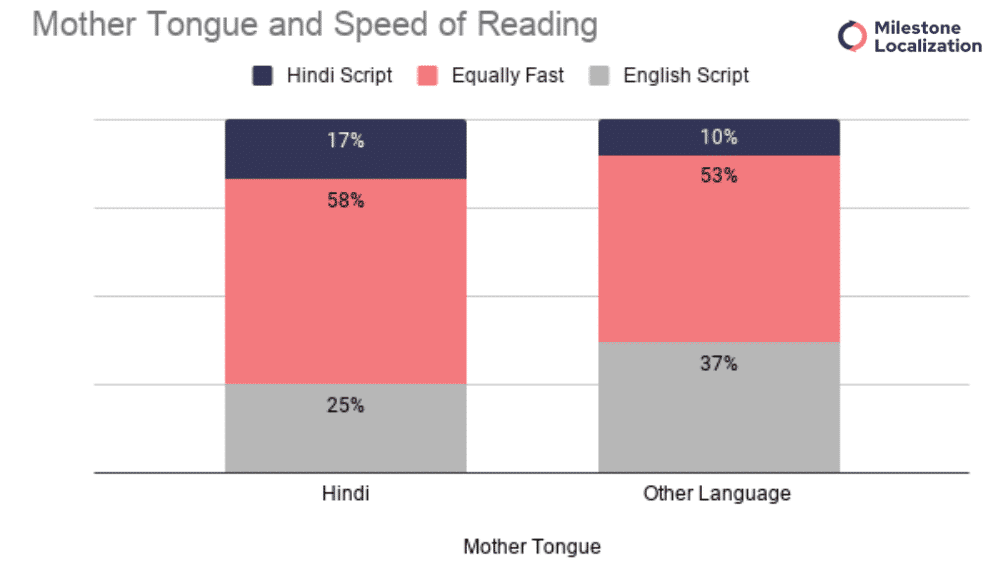 48% of those with Hindi as their native language prefer Hindi written in Latin script while 30% prefer traditional Devanagari script. 22% stated that they prefer both scripts equally.

65% of those with other mother tongues prefer Latin script, 21% prefer Devanagari script and 14% prefer both scripts equally.

One of our respondents, Yagna commented “I am fluent in reading Devanagari on paper. But I am not comfortable reading the scrip on any electronic devices…that is a key factor for me to just ignore anything written in Devanagari!” 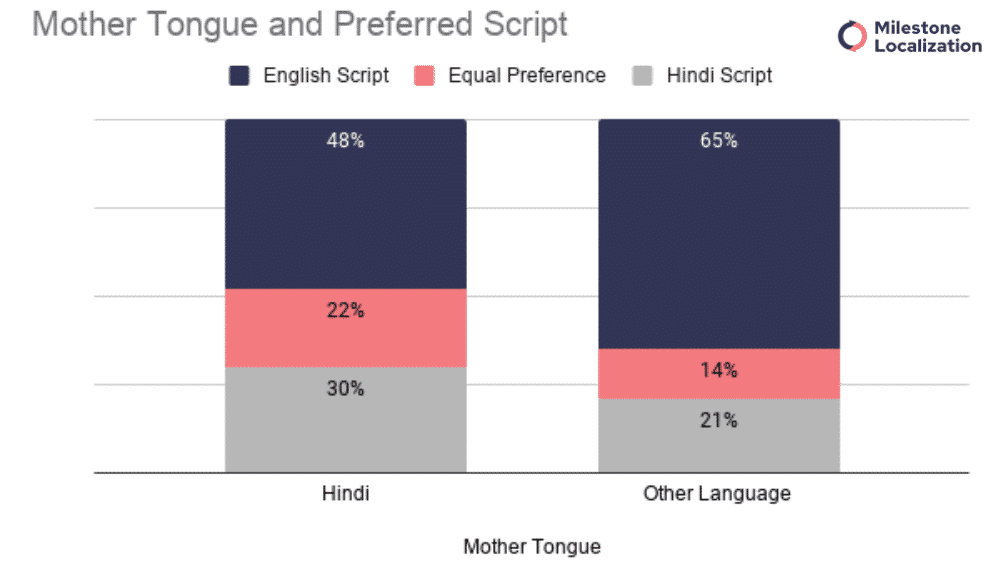 4. Mother Tongue and Exposure to Hinglish

55% of people who have mother tongues other than Hindi are exposed sometimes to Hinglish, 18% come across Hinglish all the time while 28% are never exposed to it. 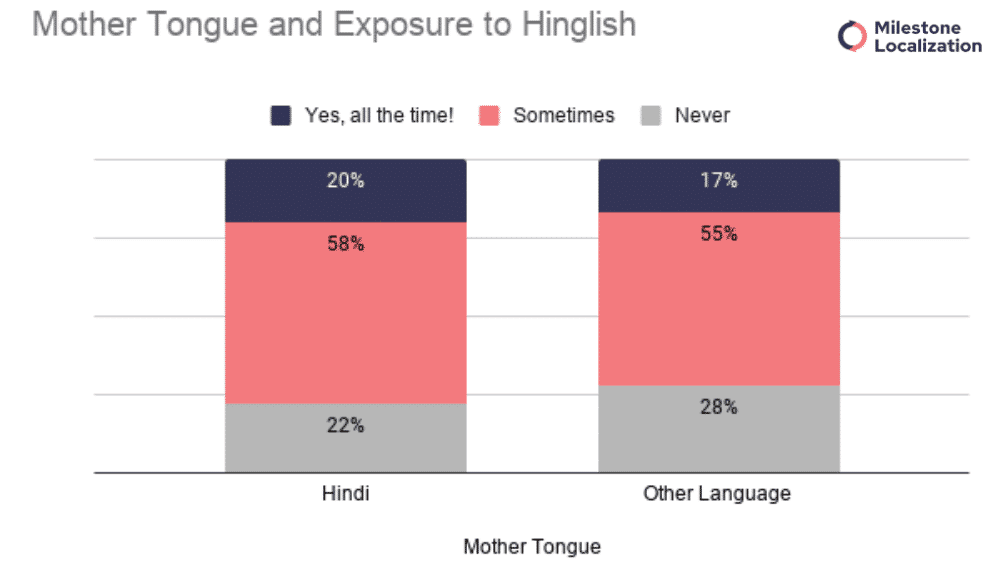 1. Frequent Usage and the likelihood of mixing English and Hindi

Among those who use English more frequently, 48% mix up Hindi and English sometimes. While 28% always mix the two languages, 24% never mix the two.

Among those who use Hindi more frequently, an overwhelming 59% responded that they always mix Hindi and English. 37% mix both languages sometimes while only 4% stated that they never mix the two languages. 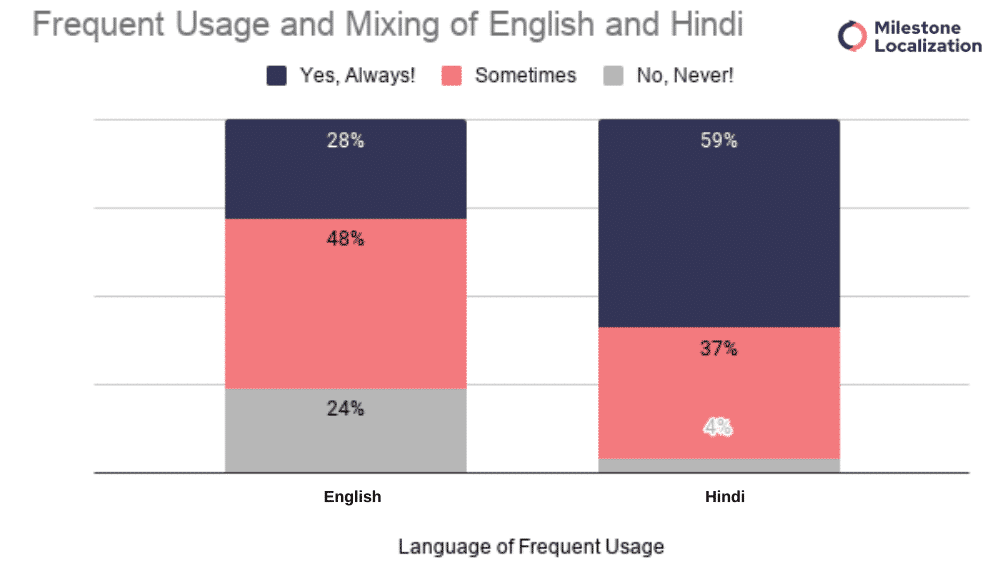 A participant, Vandana commented, “Since all the written communication is done in English…my Hindi writing skill has gone down over the years” 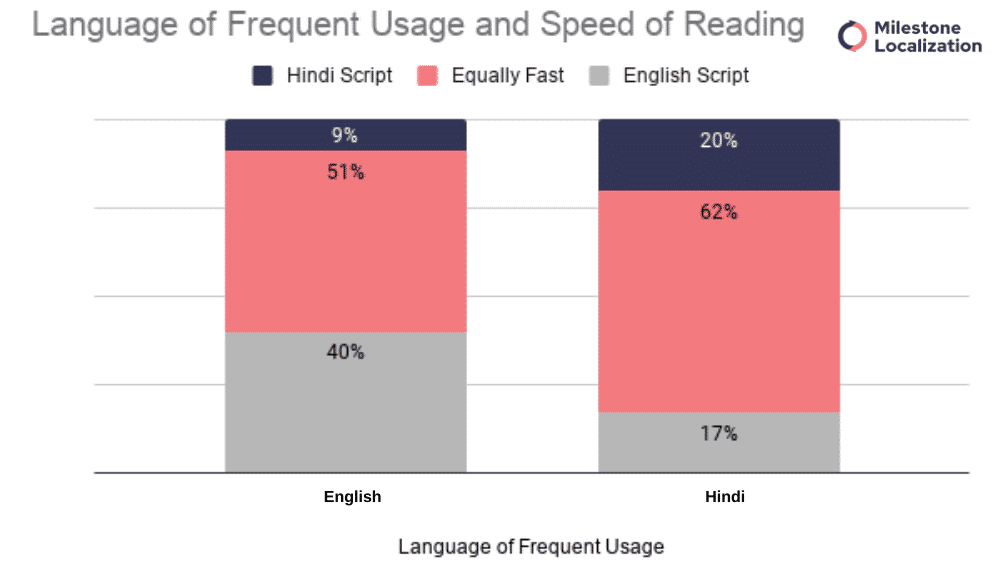 67% of those who used English more frequently preferred the Latin script, 18 % preferred the Hindi script while 15% recorded equal preference. 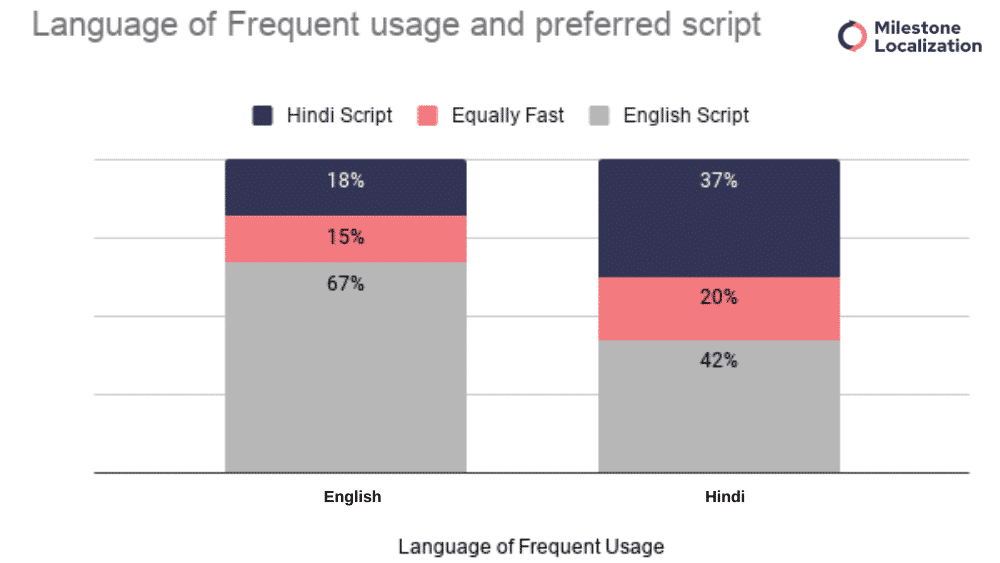 4. Frequent Usage and Exposure to Hinglish

56% of people who use English more frequently stated that they are exposed to Hinglish sometimes, 16% are exposed always and 28% never come across Hinglish.

Among those who use Hindi more frequently, 57% come across Hinglish sometimes, 22% all the time, and 21% are never exposed to Hinglish. 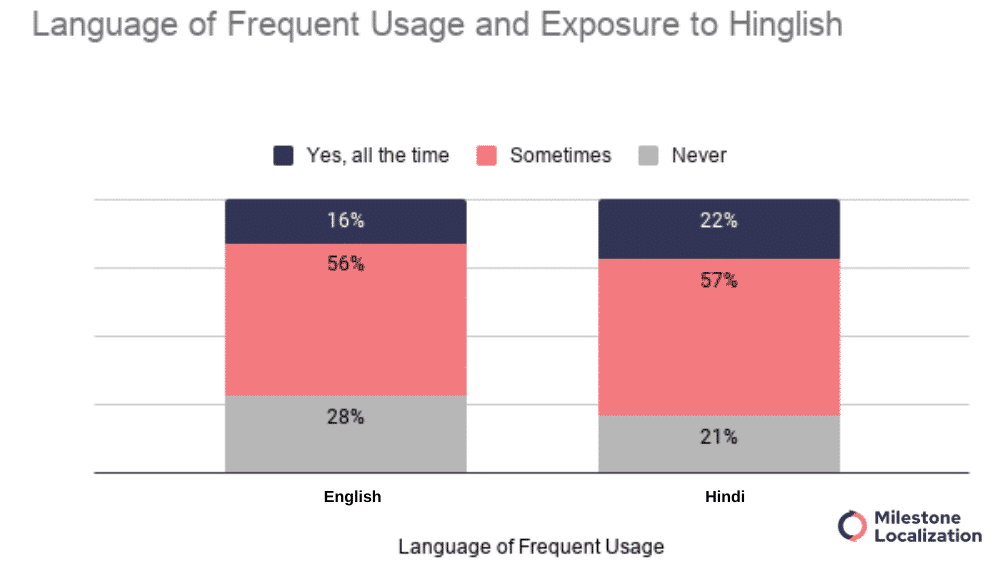 Since the survey was conducted completely online, only people with smartphones and internet connectivity took part in it. Further, the language of the survey was English. Thus the respondents are representative only of the urban/semi-urban English-speaking population with internet access.

As one respondent, Ankita Srivastava said, ‘To be honest – English gives us the class and Hindi, the feels.’

Across age groups, the urban and semi-urban online Indians prefer the Latin script over the traditional Devanagari script. Brands looking to connect with today’s internet users and get their message across effectively, need to localize instead of just translate their content.

We can help you adapt your content in Hinglish, Kanglish, Tamlish and more.

For more information or permission to republish, contact us on [email protected]